Back again with some random songs I randomly really liked this past week. Good times.

As always would appreciate you following us (let's face it: me) on Facebook for more recommendations, in Instagram for nude pics with Dead Congregation vinyls (probably not), and on Spotify for monthly recommendation playlists and special Patreon-only content (oh yea, there's a Patreon too). Don't forget to check out the interviews released this week as well (it was WOE week! Hurrah!).

1. Zeta – "Pui Puy," from Mochima (Independent). Venezuelan experimental/hardcore/lo-fi band Zeta has been hard at work in the last few years. Putting out albums, touring the U.S., getting their name out, as any band should. Unlike most other bands, however, they also recorded this most recent album under threat of its lead singer being deported after his application for American residency was refused. But as fucked up as that situation is it would be pretty fucked up to focus on that unfortunate drama as opposed to just how great, weird, and unique the music on this album is. A very "underwater" style of production which, I have to say, is an acquired taste, that complements the weird mix between emotional urgency and despondent melancholy that seems to drive most of the music here. Pretty original and moving stuff. 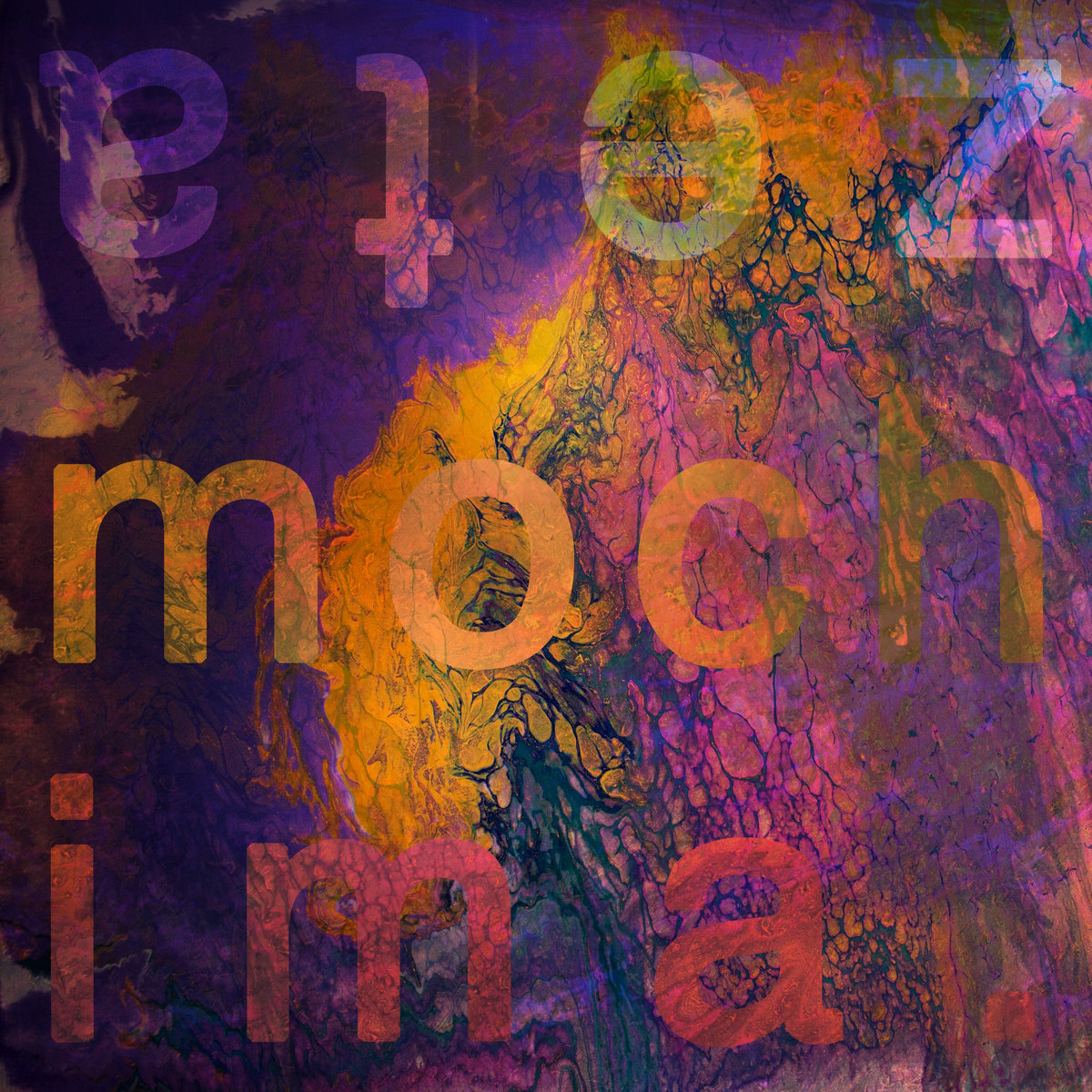 2. Esoteric – "Coulmination," from A Pyrrhic Existence (Season of Mist). Recommending this song out of the new and quite epic Esoteric album is kind of cheating. Cheating in the sense that a lot of the impact that the sudden burst of dynamic riffing is borne out of the nine hundred minutes of nuanced movement that preceded it. So, in a way I'm not say "listen to this song" but more like "listen to this album and notice what this song is doing within that whole." If feels like giving out homework when you're saying "Here, check out this 99 minute album," but it really isn't. This is some of the most challenging and beautiful music to come out all year, and the influx of chance this part of that greater context. Like walking serenely through a creepy forest and then suddenly being attacked by guitar killer bees. So good. 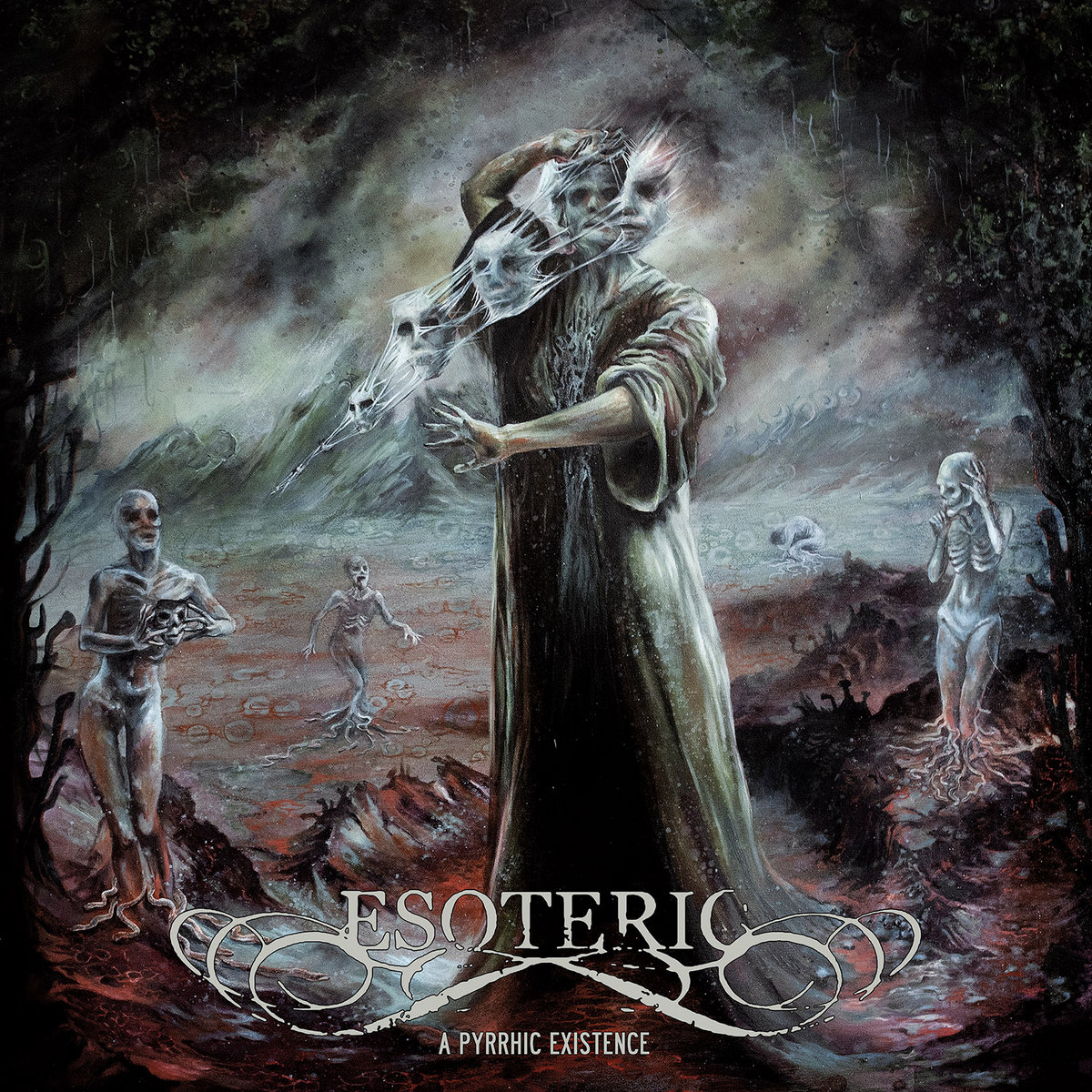 3. Lost Realm – "…Cemetery," from Demo 2019 (Independent). Asheville, North Carolina is officially the most realm-y place on earth. Earlier this year a local death metal band by the name of Harsh Realm put out a great demo of good ole' fashioned death doom. And now it's Lost Realm, hailing from the same city to put out, well, a demo of good ole' fashioned death doom. Lucky for us all these realm bands are great. Idiosyncratic, reverby, super short, and quite intriguing. 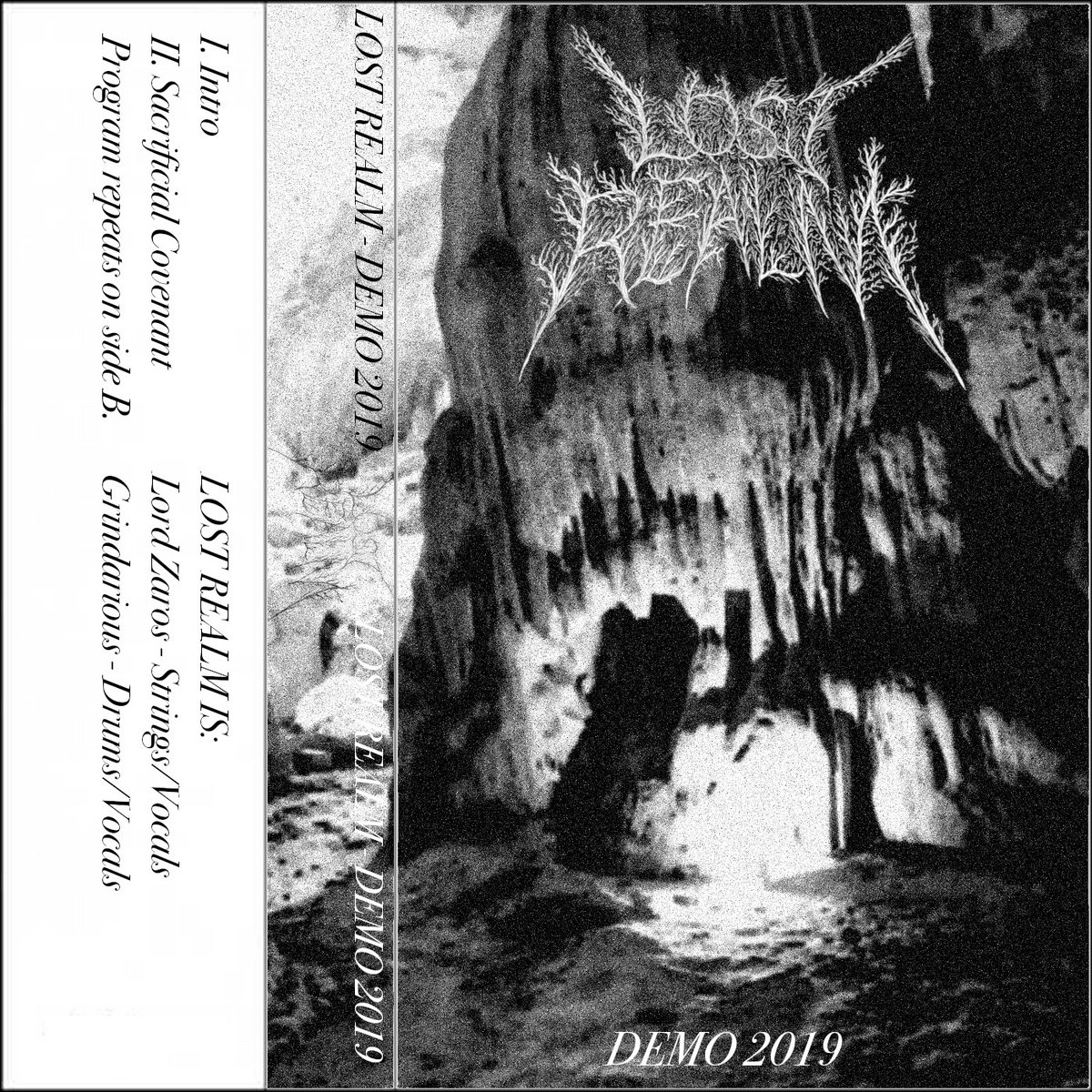 4. Envy – "A Step in the Morning Glow," from The Fallen Crimson (Temporary Residence). The masters of self reflection while ruining amps are back with a new album, due early 2020, and this first single is a mesmerizing reminder of just how uniquely good they are at doing what they do – that combination of post-rock ambience and screamo/hardcore emotional exhaustion. Just a beautiful song, and a very promising view into all the beauty that will befall us in a few months. 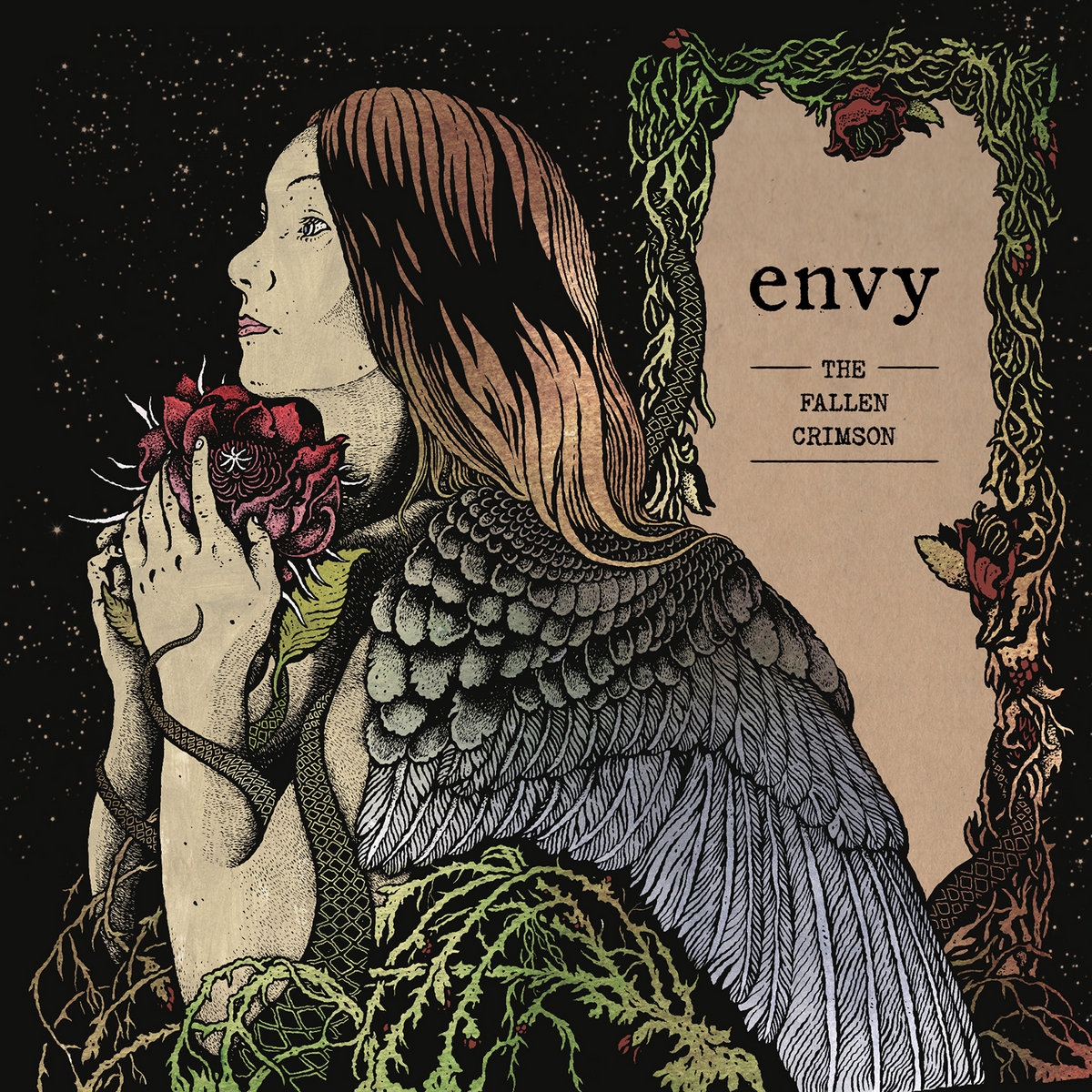 5 Liturgy – "Pasaqalia," from H.A.Q.Q. (Independent). The following is not a statement on Liturgy's (AKA Hunter Hunt-Hendrix's) musical aspirations or overall trajectory. I have no idea where that man is going, where he wants to go, or how I will feel about any of it when it's all said and done. I have a feeling he doesn't really care about what I or anyone else thinks, so this is just me thinking out loud. This is probably the best Liturgy album to date, and I have been a fan of pretty much everything he's done and even interviewed him back in 2015. But while I was on board, generally speaking, with the experimentation and weirdness of 2015's The Ark Work, I didn't go back to it as much as I did to his previous albums. And, truth be told, I didn't go back to those as much either, even though I did love a lot of songs here and there. But this album feels different. I feels like he's taking everything he's learned thus far (sans the great Greg Fox) and combined it to see how it would fit. The result is some of the most cohesive work of his career, some of the tightest songwriting, and some pretty memorable songs. I chose this one, I should say, not because it's t he best example of the old + new = best dynamic I'm describing here, but because it feels like a new chapter in Liturgy's musical quest, a, if you will, Neurosis-fication of the Liturgy sound. And I am here for it, wholeheartedly. 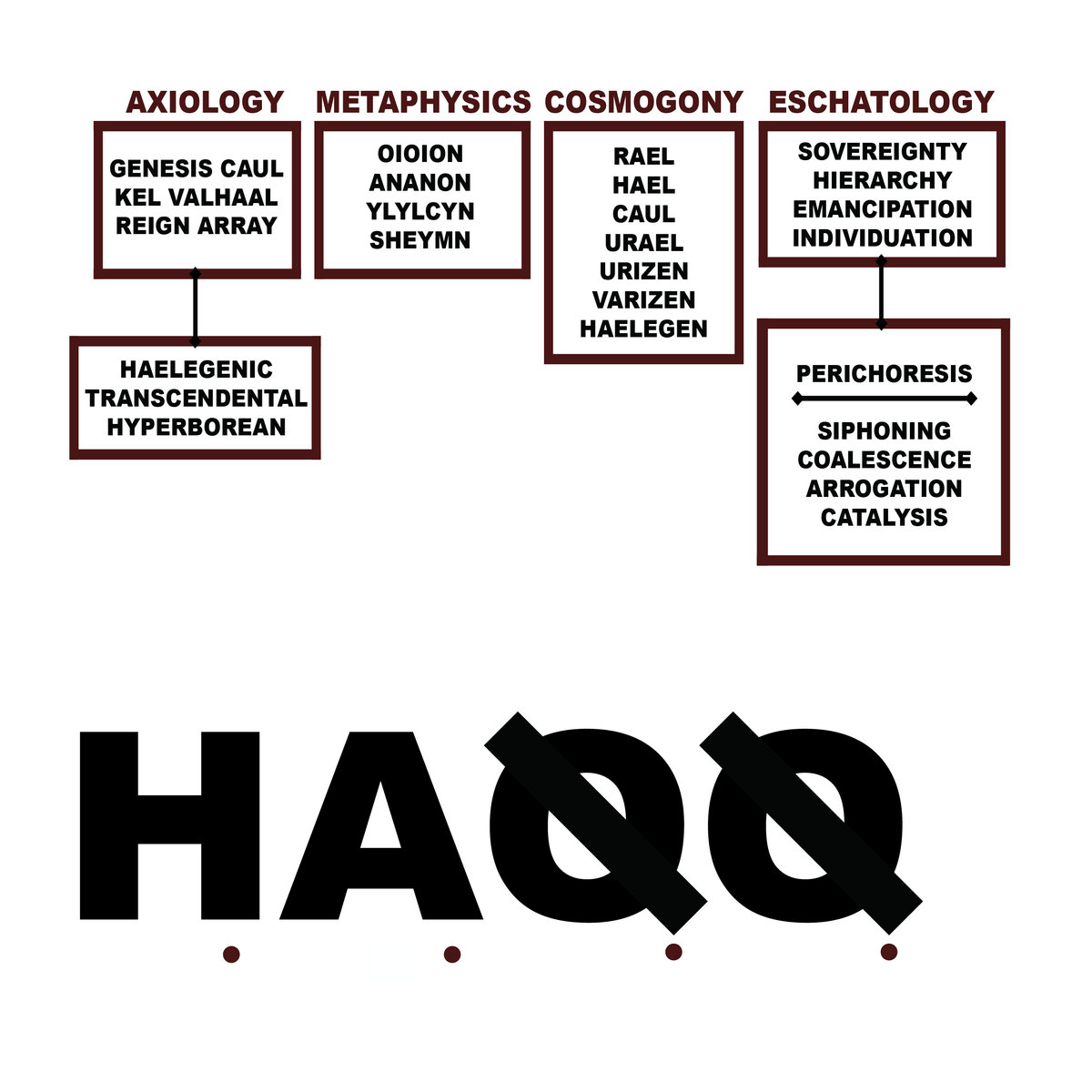 6. dai-ichi – "shina moeta ki," from dai-ichi (Fólkvangr Records). Hmm. So. Yeah. If Burzum was a war-metal band with, I would imagine, a GWAR-like get up, and an absolute addiction to sold-state, fuzzy amps, then it would probably sound something like dai-ichi. Just a moment ago I was drinking some hot tea (sore throat), and I sipped it when it was a bit too hot, the liquid going down my throat in a way that was both intensely pleasurable (because it's nice sometimes when something hurts that part that hurts you, kind of like a firm massage) and painful. And instead of inhaling rapidly in order to quell the storm of pain, I let it ride. That's this song, as well as this album, in a nutshell. Cover Art: Alyssa Mocere. 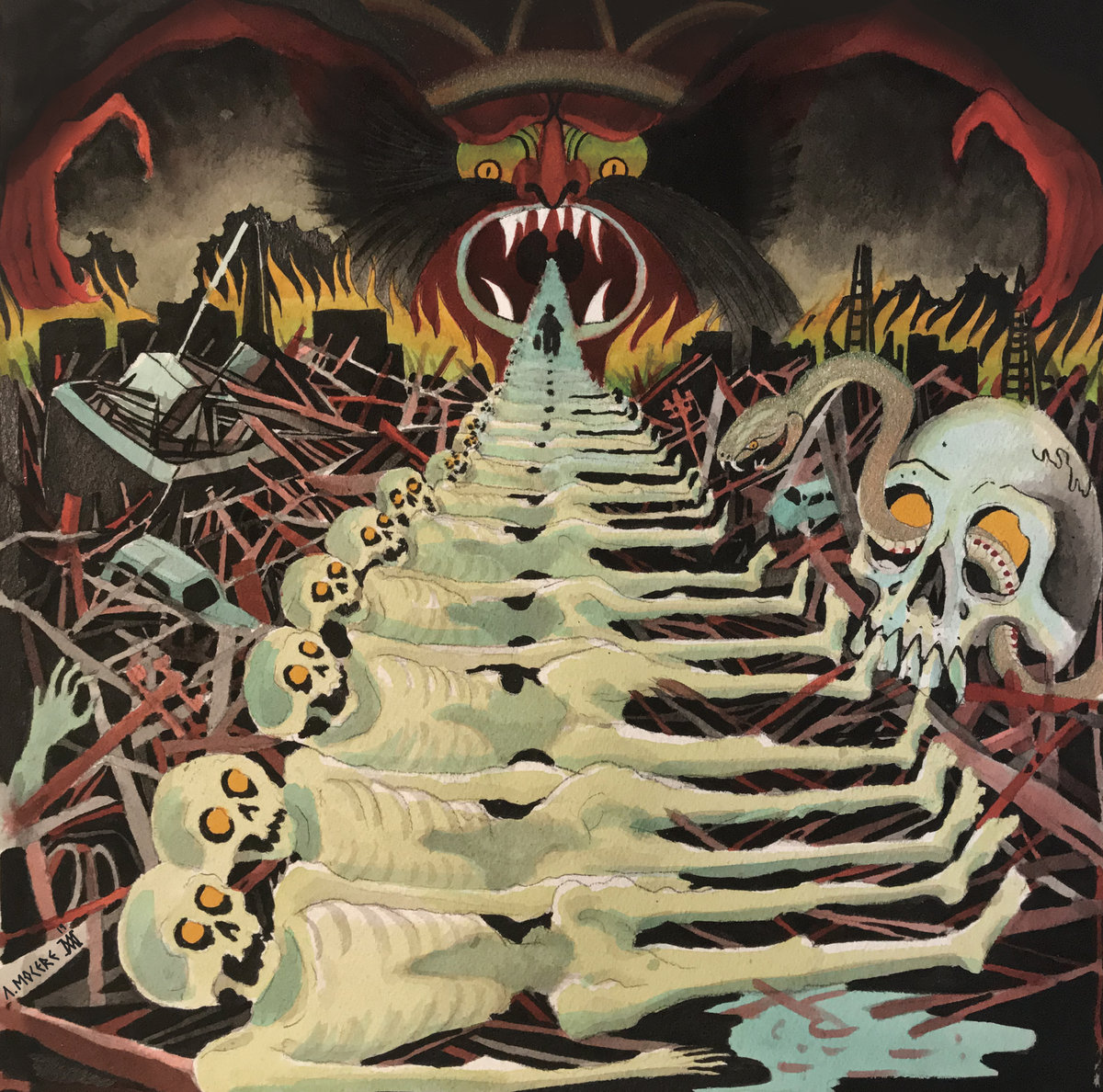 7. Garganjua – "The New Sun," from Toward the Sun (Holy Roar). This one comes hot off a recommendation by More Pearl-Zur who is not only a lovely person but also quite the Bandcamp collector's presence and a person of good taste overall. And a good thing too, since Holy Roar, as wonderful as they are, have fell off my daily radar and it well past time I checked out what they were up to. And this new song by UK post-metal/post-rock outfit Graganjuna hit the spot right on (especially after the painful chaos of dai-ichi). Pleasant arrangements, wonderfully recorded instruments, the ability to turn on the gruff when it's time to get heavy, and, so, pretty much what one may want from a modern European-sounding (The Ocean Collective, Cult of Luna) post-metal band. Will definitely check out the new album. 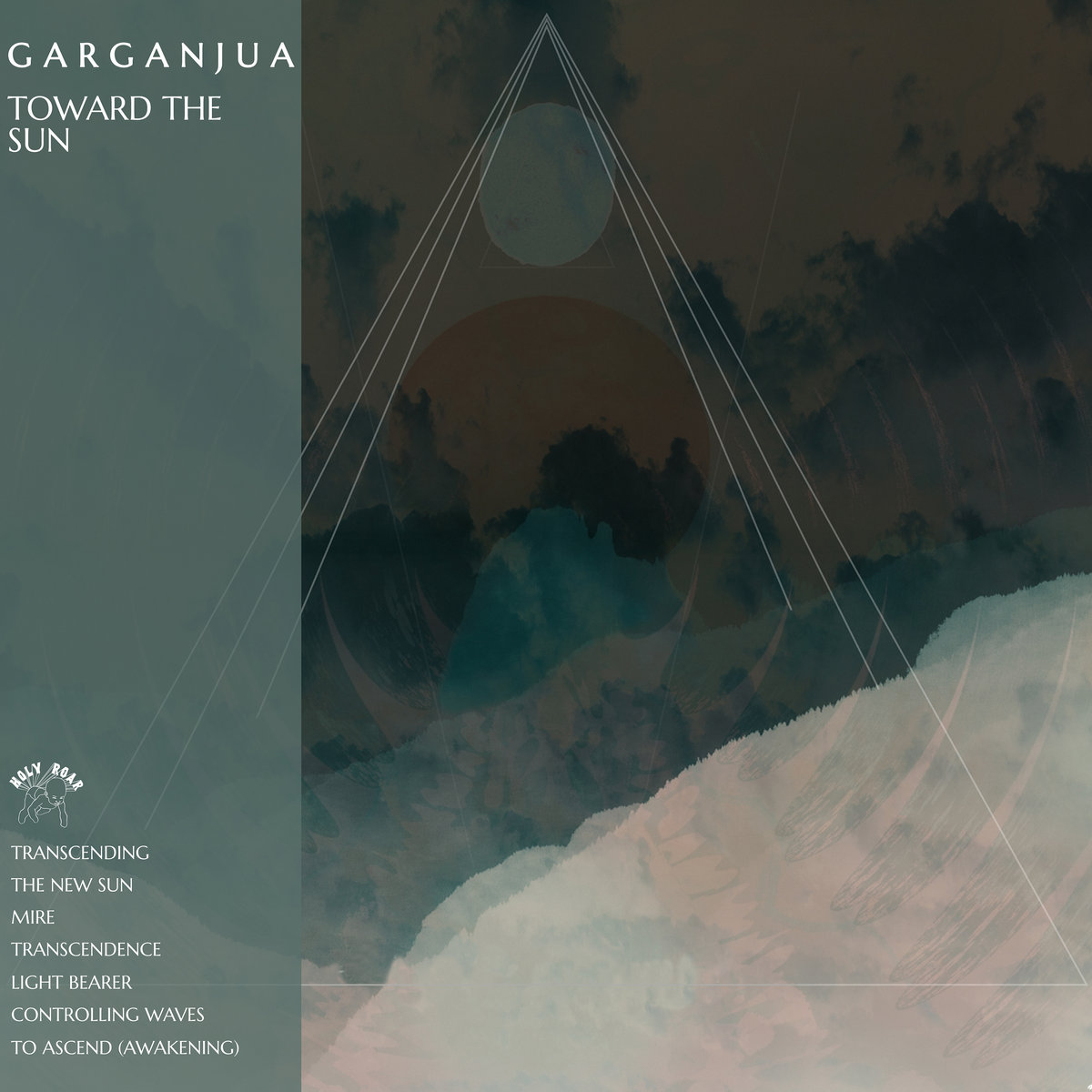 8. Hissing – "Frayed Rhizome," from Burning Door (Utech Records). Don't you just love it when a band as blatantly fucked-up and brilliant as Hissing goes: "Hey, how come our barrage of nausea-inducing wild riffing has become so accessible? Let's really challenge listeners this time!" Because I do! Hissing are great when they put out mind-bending, Portal-like death metal wizardry, and they're great when they just improvise their listeners into an early grave. Let's do it. I'm ready. EP to feature guest contributions by Ted Byrnes, Joy Von Spain, and Spencer Hazard. Cover Art: Stefan Thanneur.

9. Chat Pile – "Dallas Beltway," from Remove Your Skin Please (Independent). I live for this kind of music, by which I mean the kind of music that doesn't exist. This music doesn't exist, this never happened. This dangerous careening on the precipice of falling apart as a human to the sound of drums, threatening guitars, and brilliant song titles, it doesn't really exist. And the band that make this impossible music are bands that must cherished. So, hey dudes from Chat Pile, I cherish you. Don't die. Cool? 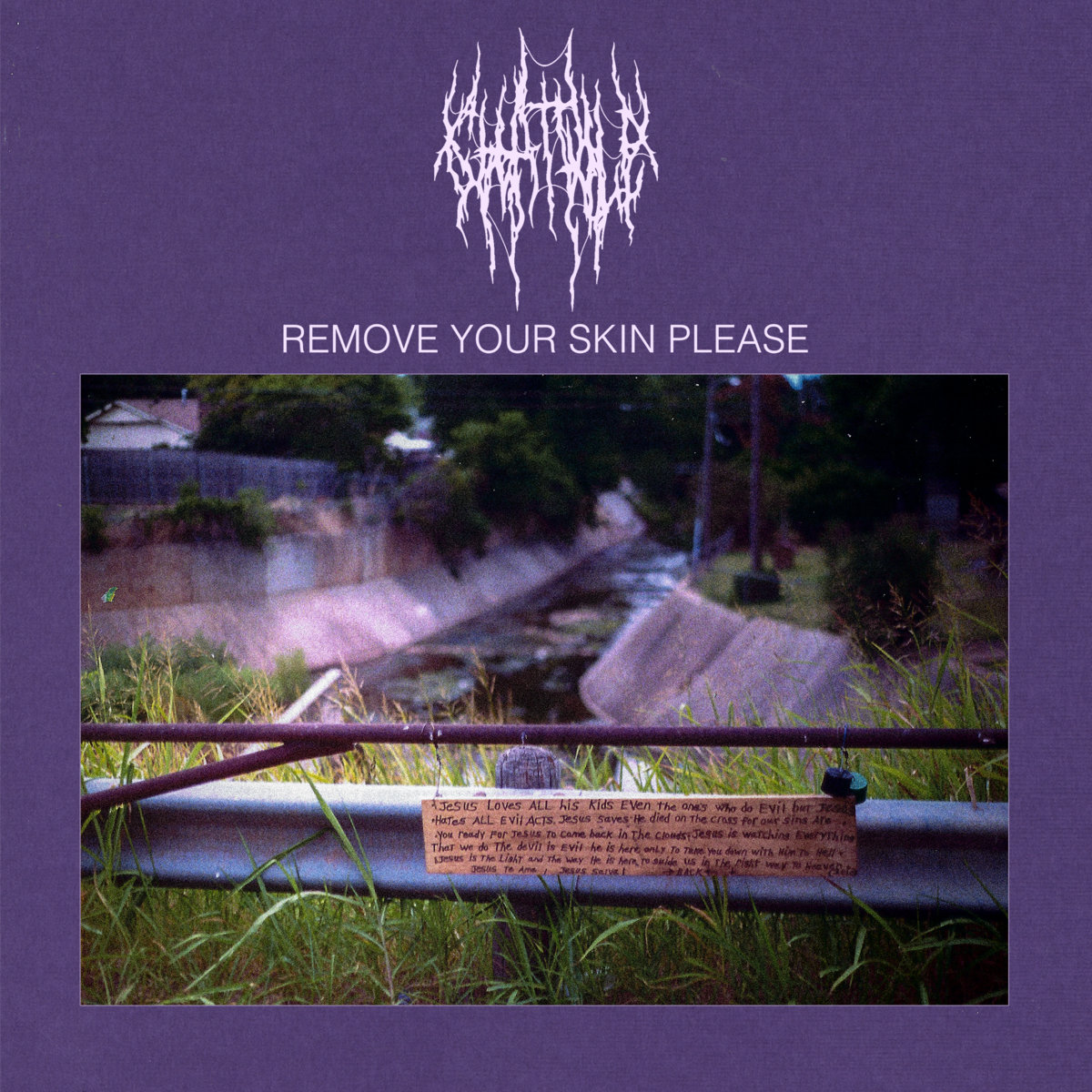 10. Suppression – "Fruit of Sickness," Repugnant Remains (Unspeakable Axe Records). A truck made of flesh parts with a big smokey diesel engine and headlights made of tortured eyeballs hits you in the face, blood squishes everywhere and there's a slippery, gelatinous substance in your shoes. In a good way. A very good way. A collection of Chilean death-metal scene denizens (Hellish, Putrid Yell, ex-Ripper) just fuck around and write a perfectly gory-yet-well-written-and-riffy thrashy death metal song. That's about it. Cover Art: Visceral. 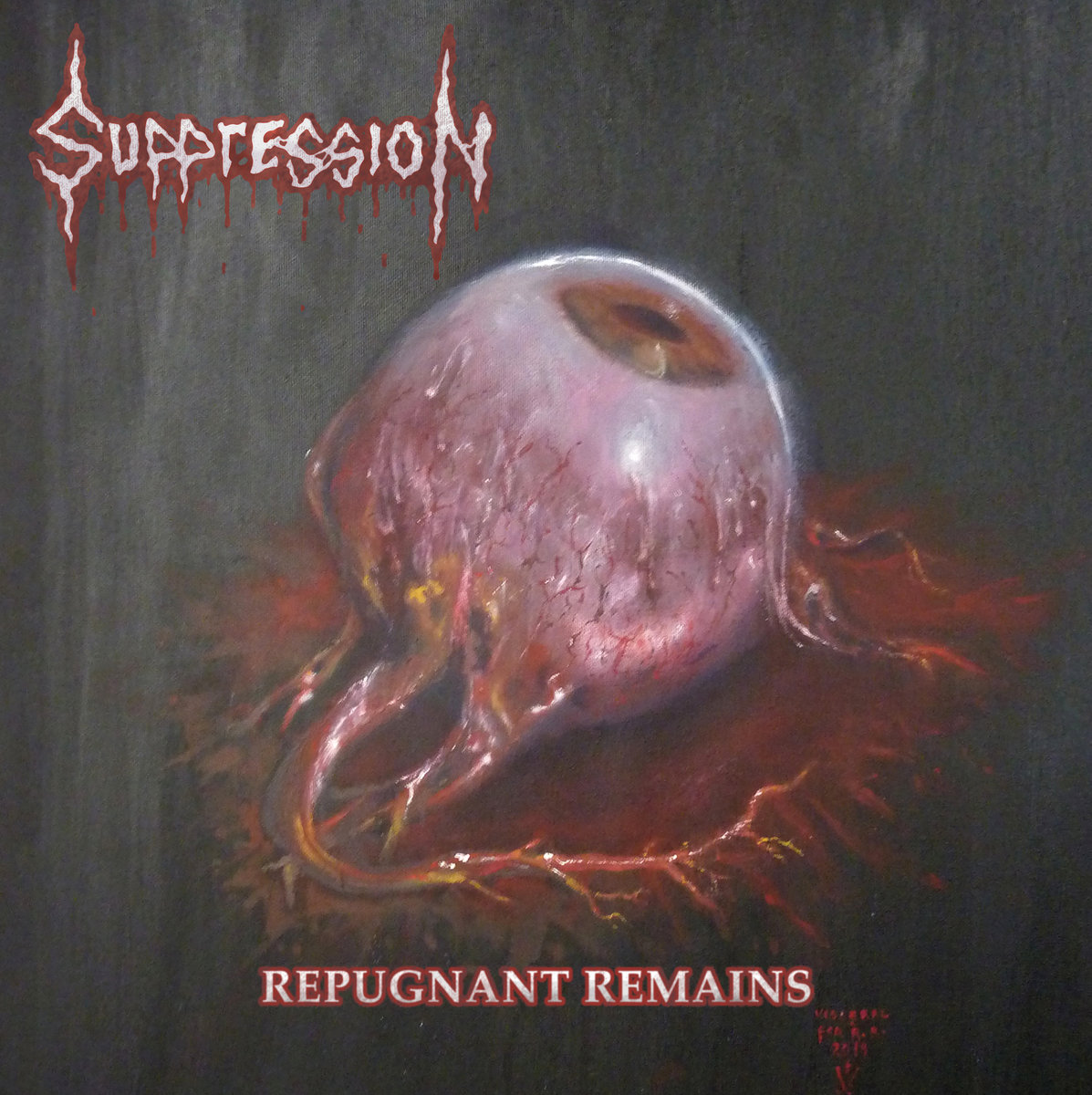 11. Megalith Levitation – "External Trip / The 4th Plateau" (Hymns of Apocalypse). In a weirdly enjoyable way, this feels like the chopped-and-screwed version of True Widow. So, basically True Widow's slow drudge of dead emotions, only 900 percent slower, more stoner in its overall feel, and if True Widow was using Sunn amps the size of small buildings. I think this may be the kind of music best enjoyed high, but, I don't know, it all sounds so fucking good, you know? Just sounds so good it's like I don't nothing is really happening by way of music for whole five-minute stretches. Entrancing, that's the world. Entrancing. Cover Art: Godlike Ikons. 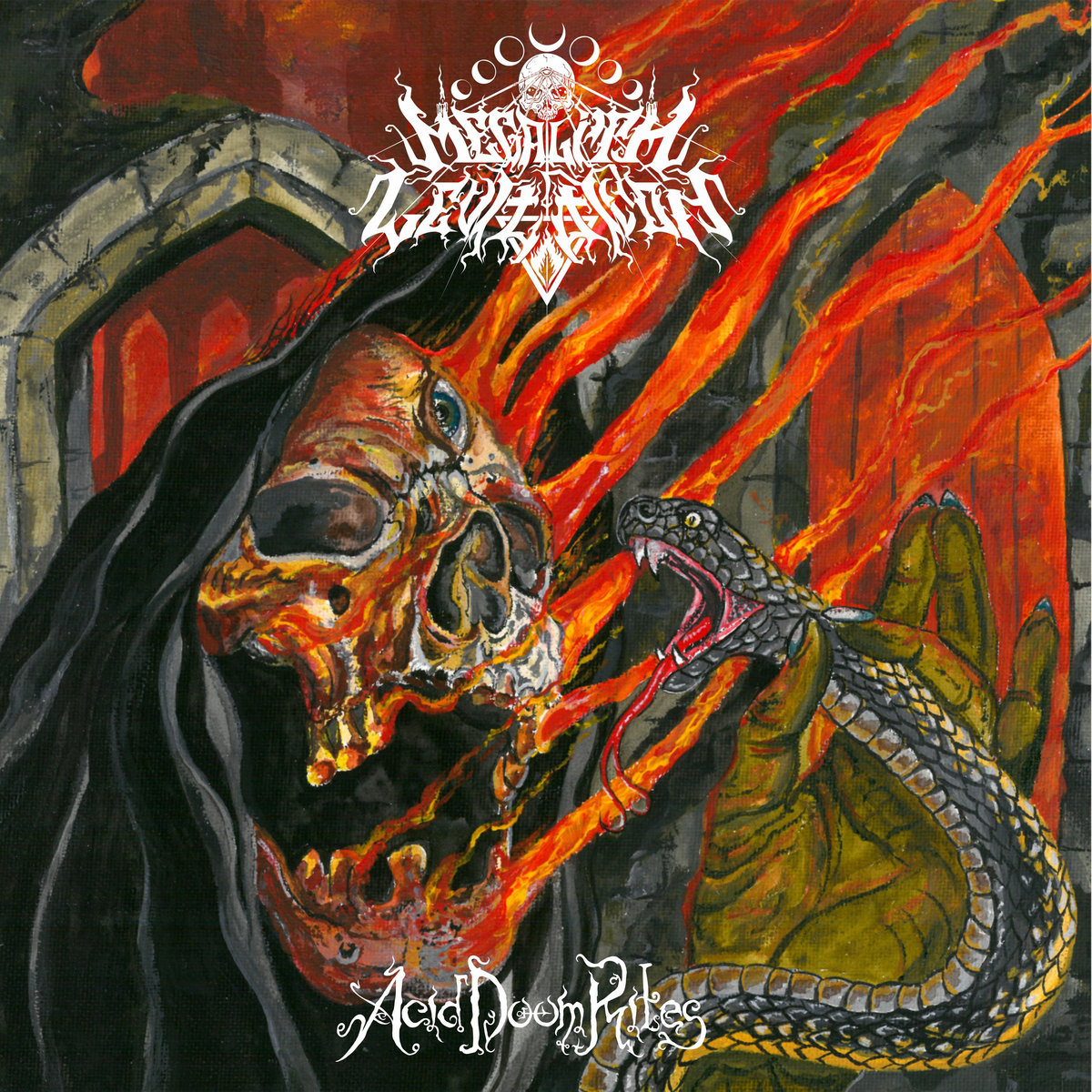 TWO – Speaking of fests, the next installment of Gilead Media/20 Buck Spin's Migration Fest is going to actually kill me. This is a lethal list, and it's not even complete (COUGH Inter Arma COUGH).

THREE – Speaking of Migration Fest-adjacent stuff: PANOPTICON has announced what looks like a long split with fellow USBMers Nechochwen. There's a trailer/sampler of the whole thing available here.

FOUR – My kids are still cool, but I have had a cold for like two weeks now. That is not as cool.

FIVE – NYC black metal outfit Anicon (members of Woe, Yellow Eyes, Ruin Lust, and more) were robbed while on tour with Haunter. They got a quick crowd-funding campaign up to finish the tour, and released a name-your-price live album to thank their fans for all their help.

ONE LAST THING, PROMISE: Three amazing albums celebrating 30 years this week, and bear a good returned listen if it's been a while: Godflesh's Streetcleaner, Terrorizer's World Downfall, and Ministry's The Mind is a Terrible thing to Taste.

← Machine Music's Albums of the Decade: An Interview with Woe
THE WAR INSIDE MY HEAD: AN INTERVIEW WITH KAATAYRA →