Keep safe! Metal! Yay. Also, check out this new, awesome split by Zeresh (neo folk/doom) and Autumn Tears (neoclassical/experimental) and also check out the interview we did with both projects.

1. Urushiol – "Iridescent Darkness," from Pools of Green Fire (Psychedelic Black Metal – Independent). Bass-driven, wacked-out, spaced-out, disorienting black metal from the gentle fingers that strum the bass in such luminaries of fucked-up black metal such as Yellow Eyes, Anicon, and Morbid Sphere. Often it's enough for track featuring one meandering riff for a band to get the "psych" tag but believe you me when I tell you that is not the case here. Bendy, explorative, trippy, and BASS-y. Gotta love it. FFO: Oranssi Pazuzu, Sigh, Sleepwalker. 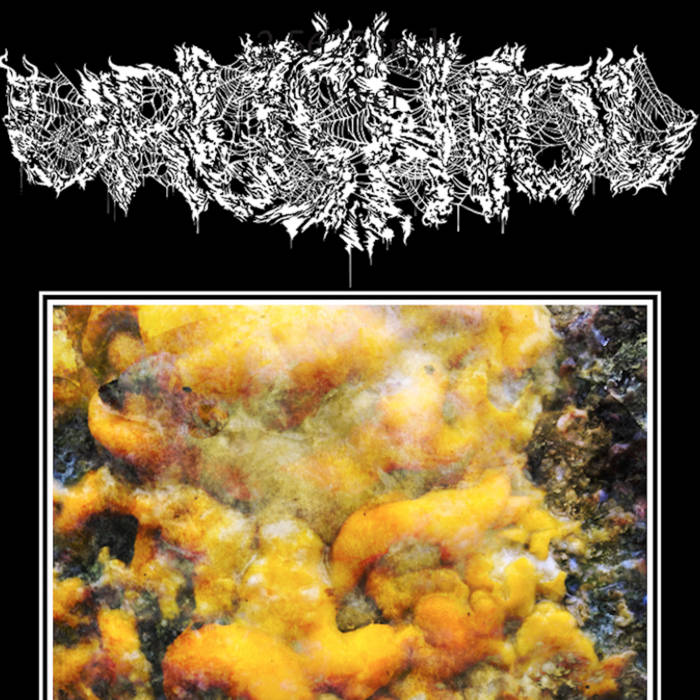 2. Somali Yacht Club – "Silver," from The Space (Stoner/Post-Rock – Season of Mist). I've been following these Ukrainian doom-stoners for quite some time now, stumbling across their etherial heaviness with 2014's The Sun. I don't usually go for the clean-vocal, stoner-y type deal but my god they do it well with a ton of character. This first track from their upcoming album via Season of Mist sounds just as great as The Sun and The Sea, and just the perfect soundtrack for chilling out as the world goes up in flames. FFO: Blackwater Holylight, YOB, Green Lung. 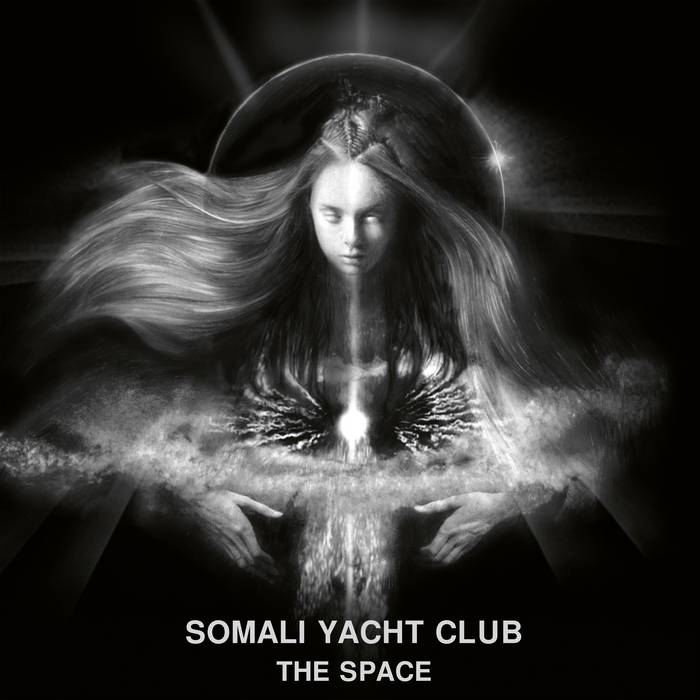 3. Intolerance – "Embodiment of Chaos," from Dark Paths of Humanity (Death Metal – Godz ov War Productions). Things were getting a bit too atmospheric and psyched-out there for a moment so I guess I just needed an injection of sewage into my brain. Enter Intolerance, a Spanish band just now releasing their debut album and hell-bent on making everything dumb, heavy, and gross. So fucking great. FFO: Undeath, Cerebral Rot, Venomous Skeleton. 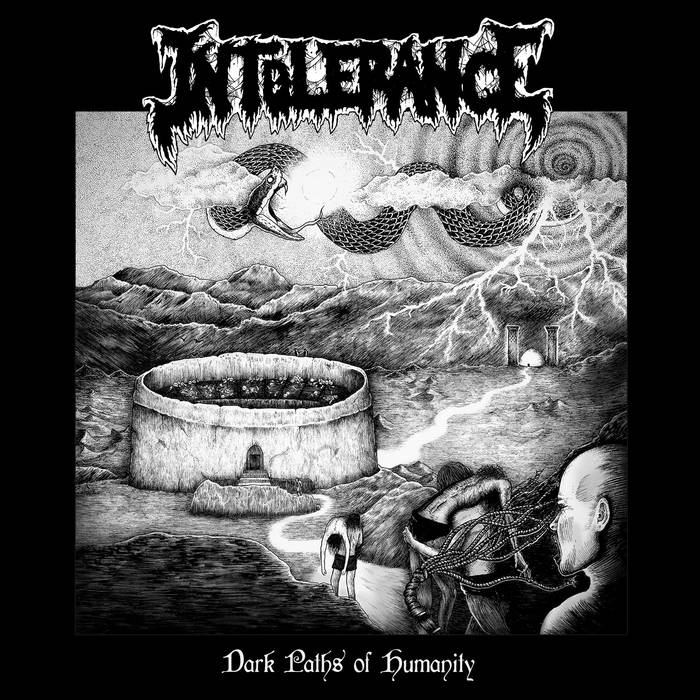 4. Immolation – "Overtures O The Wicked," from Acts Of God (Death Metal – Nuclear Blast). I love chocolate, don't get me wrong, but I think as I grow older my favorite deserts begin to be more of the fruit-based variety. Tart, that's the shit. At some point in the last few years I've been reaching the same conclusion regarding Immolation. Yeah, Death was the band that built death metal in my mind, and Morbid Angel was the band that may have perfected it. But Immolation, I have realized, is the band you grow up to realize is in fact not just the best death metal band with the most consistently brilliant discography, but top contender for best metal band ever. And have we with this new album? Oh, yeah, just another death metal masterpiece. An unreal album from an unreal band. FFO: Death metal. 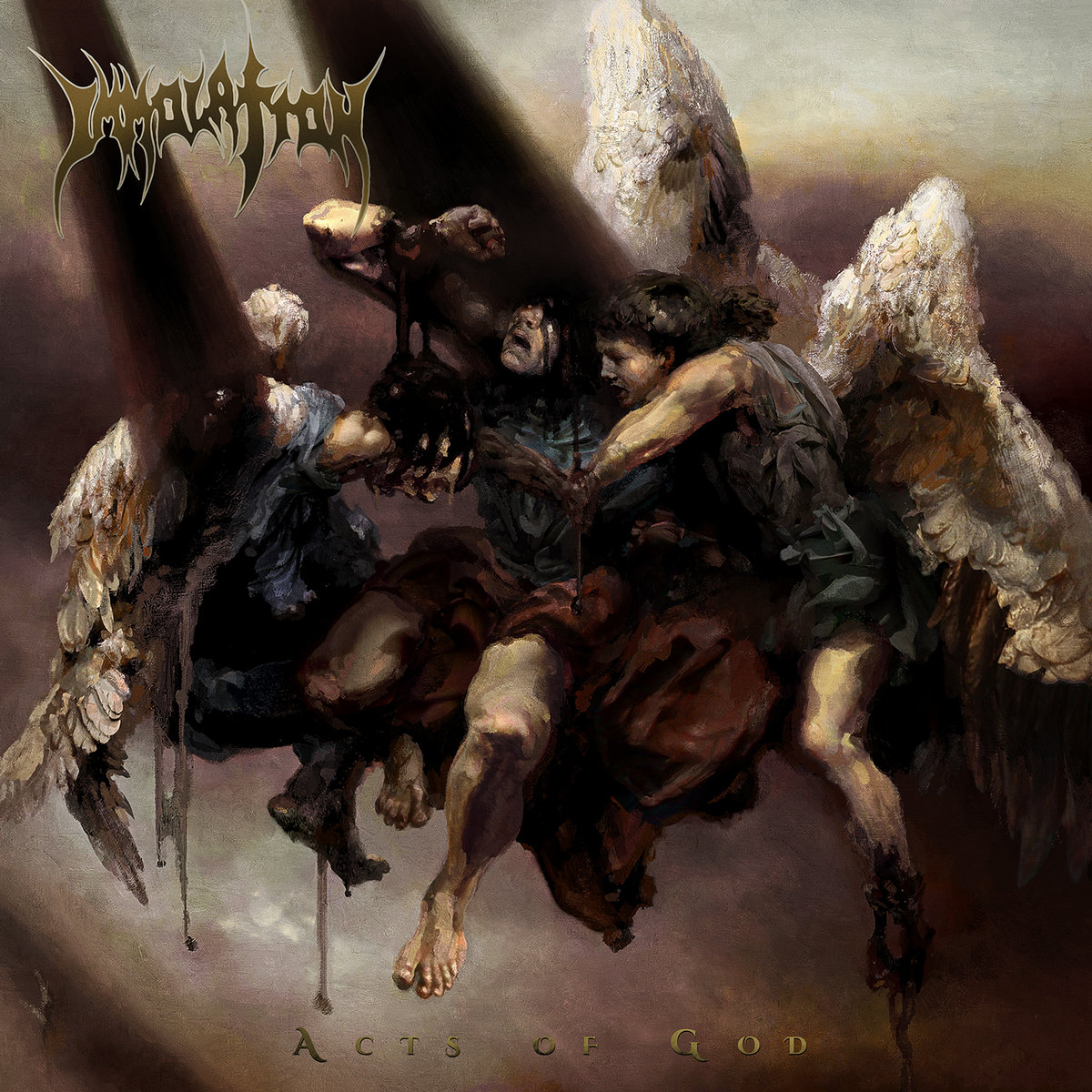 5. Déhà & Marla Van Horn – "Dust and Rain," from Earth and Her Decay (Doom Metal – Musical Excrements / Burning World Records ). So, boys and girls, what genre has Déhà perfected today? Well, let me tell you, it's one of my personal favorites – the mid-to-late-90s-weepy-doom album! Marla Van Horn's voice here is like a gift from another sphere of being, a beam of radiant light. Take that shimmering lace of a performance and then lay it on top of some My Dying Bride-like grandiose doom and you get what has to be some of the most beautifully recorded and written and all that jazz music I have heard in quite some time. He did it again. Shocking. FFO: My Dying Bride, Evoken, Theatre of Tragedy. 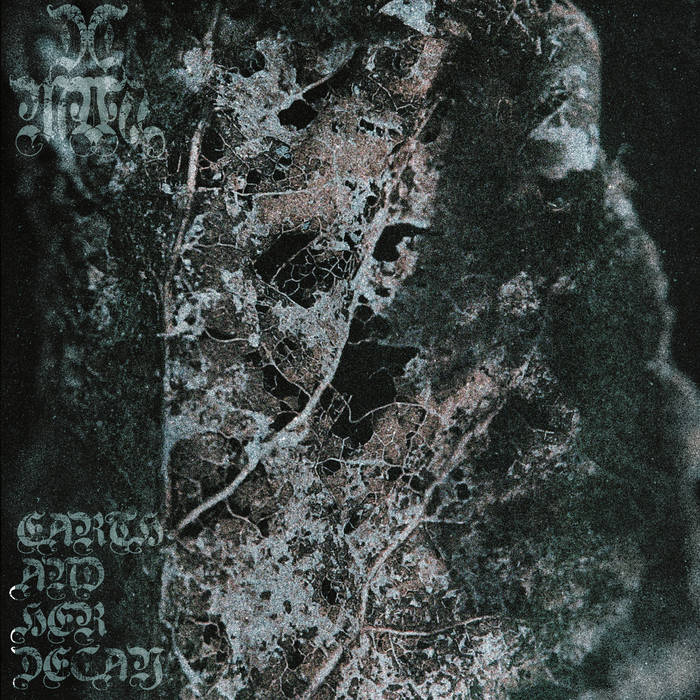 6. Hate & Merda – "Zoster," from Ovunque Distruggi (Sludge/Screamo/Post-Metal – Breathe Plastic). A few days ago we were taking a drive in my hometown and we happened upon my old high school, which was pretty shocking to see since there was so much new development in the area I didn't realize that's where we were. But the second I began to see where I actually was there was an immediate Matrix-like influx of memories, mainly of albums I head in my Discman walking those streets and of feeling angry. This intricate, smart, feverish album gives me that energy, of being young and angry. Of energy being emitted though every pore. And I fucking love it. FFO: The Body, ISIS, Envy. 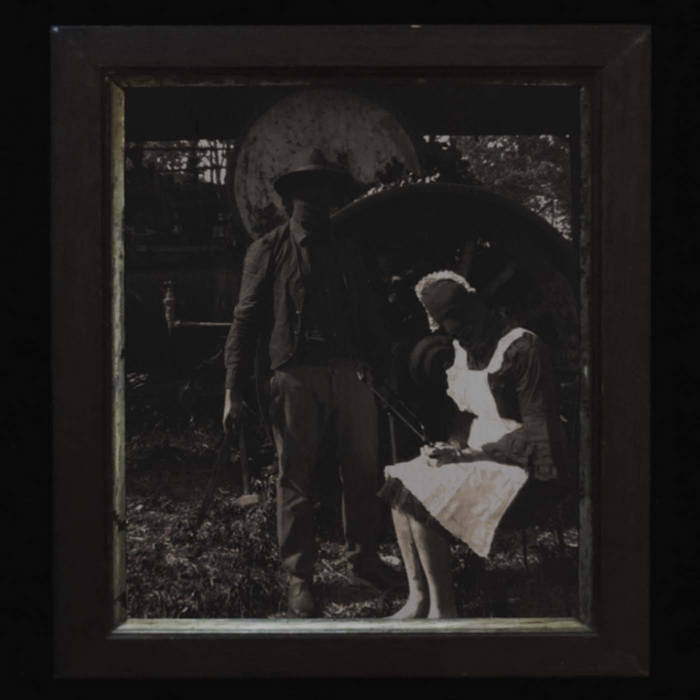 7. atameo – "hikikomori," from it sure is sad to hope for the best while expecting the worst (Screamo/Post-Rock – Zegema Beach Records/Middle Man Records). Might as well ride that emotional wave and let it build into the tsunami that is the debut album from Tel Aviv-based visceral wrecking crew atameo. Should I go full hyperbole here and claim this already to be one of the best, most beautiful, and most human albums you'll hear this year? Shall I conjure the holy name of Orchid or even Cap'n Jazz? Shall I mention the fact they participated in (and in fact wrote a song for) our most recent compilation? Yes, I shall. Miss this violent blend of crumbling worlds and hot human tears at your own peril, folks. FFO: Orchid, Frail Hands, Infant Island. 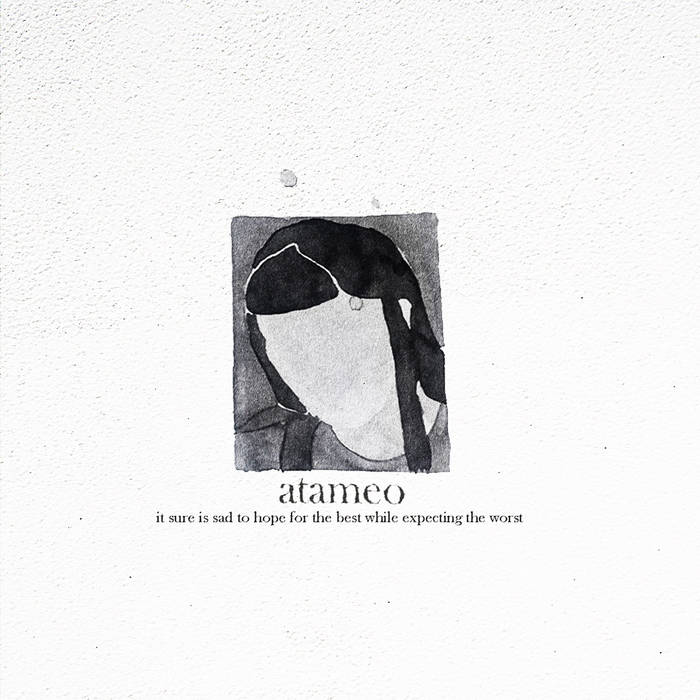 8. An Isolated Mind – "Mourning," from A Place We Cannot Go (Avant-Garde/Experimental – Independent). The musical brainchild of Kameron Bogges' unpredictable soul, this newest installment of his An Isolated Mind is back and is as sparse, honest, and piercing as ever. Made all the more piercing, it should be said, by shedding a couple of cubic tons of distortion and distractions, leaving us with nothing more and nothing less that that aforementioned troubled, unpredictable soul. It's interesting how Bogges' journey with AIM seems to be taking something of a Toby Driver-esque quality – from the Choirs of the Eye heaviness of I'm Losing Myself, to the more introspective and complex self-titled EP and now this. And much like other adventurous, brilliant souls out there in the contemporary music scene (I'm looking at you Kaatayra) this is a trip that I am both willing to go on and allow myself to be transformed by. FFO: John Zorn, Toby Driver, Charlie Looker. 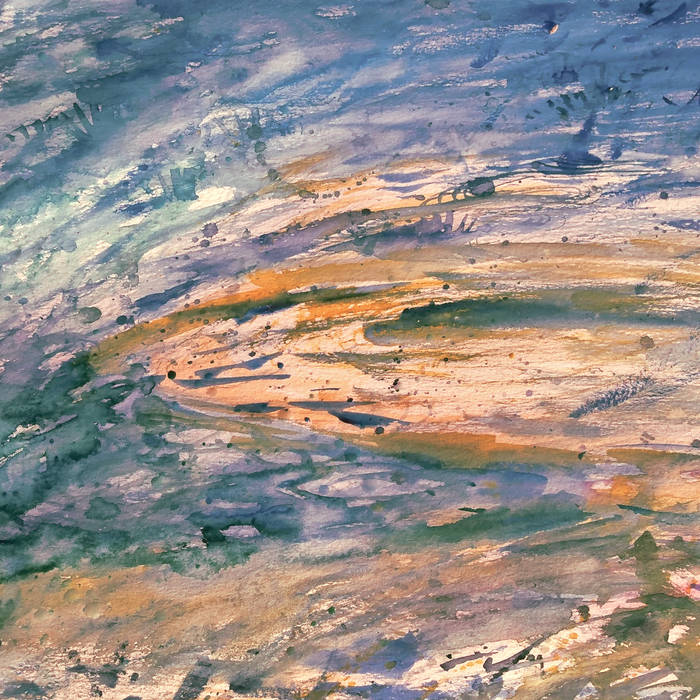 9. Svrm – "Carceri," from Червів майбутня здобич (Atmospheric Black Metal – Independent). Well, would you look at that – just last week I mentioned the brilliance of pre-Svrm band Life is Hell and Svrm suddenly announces a new release. I feel personally responsible for that, pat on back. In short: One of best atmospheric black metal bands out there is releasing new music and it's great. BIG surprise. FFO: Turia, SIlver Knife, Blut aus Nord. 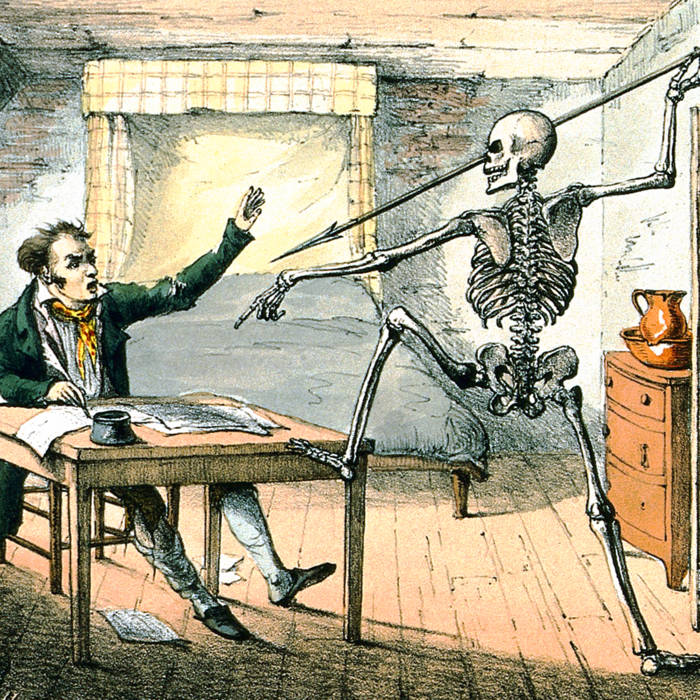 ONE: Remember that perfect, oddly jazzy, tech-death Blastanus album I mentioned a while back? Now also on tape via the great Sludgelord Records.

TWO: These Arms Are Snakes are releasing a new double LP of rare stuff and demos. Here.

THREE: Nadja are releasing a new and beautiful album! Until it arrives you can read this recent interview we did with the band.

FOUR: More stress. Does it ever end?

FIVE: Vital Spirit, whose debut EP was one of the best releases of 2020, are recording a new album.

ONE LAST THING, PROMISE: Nite have a few new singles out. Can't wait for the whole thing.

← The War Inside My Head: An Interview with Autumn Tears and Zeresh
NINE SONGS I LIKED THIS WEEK IN LIST FORM FEB 20 – FEB 26 – PLAGUE EDITION #95 – WWIII EDITION #2 →