Machine Music's Albums of the Decade: An Interview with Drastus

This is the 34th installment of the Albums of the Decade series of interviews. For the rest of the series go HERE.] 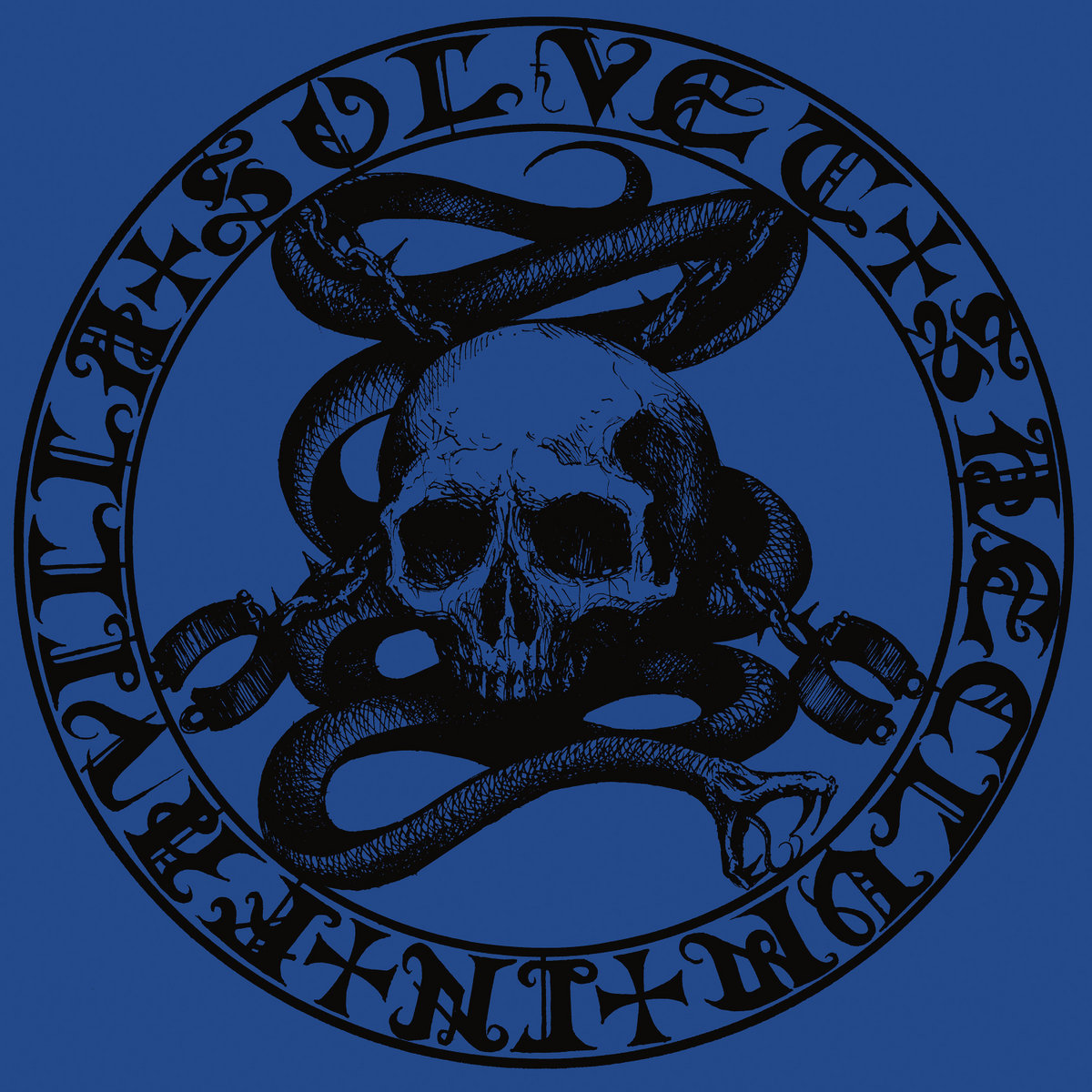 The Bare Bones: Drastus is the second full length by French one-man black metal project Drastus, coming a full 14 years (!) after its debut, Roars from the Old Serpent's Paradise.

The Beating Heart: If black metal's aim is to pull a dark blanket of nightmares over the audience's head and use the pushing-of-air that is musical expression in order to terrify, confuse, and elate the listener then one would be hard-pressed to find any album that performs those tenets better than Drastus' sophomore album, ever. One of the most ferocious, accomplished, well-rounded, and scary black metal albums of the last decade, it is the product of that rare coming together of instrumentation, production, songwriting, and fury that are the hallmarks of any great metal album. And adding to that already eerie mist of dissonant riffs and dense arrangements are standout moments of atmosphere and emotion, that create the exciting, affecting whole that is La Croix de Sang. Well within the dissonant tradition of such forebears as Deathspell Omega and Grand Declaration of War-era Mayhem, Drastus is firmly entrenched in the tradition of black metal as well as charting new paths of directness and outright emotional explosiveness.

As always, before heading into my back and forth with Drastus I would encourage you to catch up with the Albums of the Decade series as well as, perhaps, check out our new podcast MATEKHET (YouTube, Soundcloud, Spotify), a place to unload a heady mix of philosophy, aesthetics, and metal. Our current topic is "authenticity," and includes parts from past interviews with Greg Anderson, Aaron Weaver, Johannes Persson, and more. Check it out! Finally, follow us on Facebook, Instagram, Spotify and also, if so inclined, support whatever it is that we do on Patreon. Thank you for your time and readership. On to my correspondence with Drastus.

Is there a moment you can remember, with a song or an album, as a younger person or even a child, that completely shocked you or made you see music in a new way? As a kind of follow-up – Sometimes the things that move us as younger people don’t make much sense to us. So, when you look back at that moment do you kind of see why it was you were attracted to that song or album?

I always listened to music, so we could go far back. However, I'll choose a specific recording I listened to when I was around 11, 12 years old. I borrowed a tape copy of Slayer's Decade of Aggression from a metalhead, the quality of that copy was awful, so the magic was total. When "Seasons in the Abyss" started….fuck. It put something I had in me to sound. I was in resonance. There was something spiritually criminal. All the hue of Drastus is there.

I love Seasons in the Abyss, but it seems that the Slayer that remains the most influential for extreme metal is Reign in Blood. So, you could speak a bit about why it was you were attracted to that version of Slayer? Does it have anything to do, for instance, with production, or with their choice to make more dynamic music?

The sound of that tape copy was very bad, very high pitched and on that performance they did "Dead Skin Mask," "Seasons," "Mandatory Suicide" and Angel of Death" so there is enough material to give a boner to a hungry teenager.

Being a multi-instrumentalist, and writing your music, I assume, mostly by yourself, in what ways is that isolation an advantage to achieving your artistic goals and in what does that basic set up pose limitations?

It works as a benefit for the emotional density of the music, I would say, to its magickal aura. And avoiding any discussion with anyone is, for me, a bliss when it comes to my music. But it's sure that, to be my own judge, it also made me deaf to some obvious aspects while working on it. Anyway, I can't share this work, that's all.

Have you ever attempted to play in a band set up, or was it always just you since the beginning?

Never more than a drummer, and one time with my brother S.A.D for Serpent’s Chalice-Materia Prima. That was the only time Drastus was a band, so to speak.

There’s a general sense in which rock and by extension metal is a guitar-based genre. And while your compositions do feature dense guitar work and counteracting riffs there’s a way in which it seems, at least to me, that the drums are of equal or even greater importance to your work. Could you speak to the role you feel your drum work has in your music and also in what stage of composition or recording do the drums usually come in?

The rhythmic line is composed along the guitar work. It has to sometimes work with the guitars and in other times dissociate from them. There was more dissociation in the original composition, actually. The drummer gave it more sense and overall provided a great job so I was fine with it. I usually compose the two guitars simultaneously too, one leading the other in the composition, and vice versa. This gives more possibilities, more articulation, like different muscles that would serve what has to become one and the same body, a crawling magma.

Just to be clear, the fact that the drums "work" with the guitars more after the introduction of an external drummer, did that just happen?

No, it’s just that he's drummer and I’m not. So he did a better job and had some better ideas than I originally had. It was more natural and made more sense.

I realize this can be something of a banal question but you were quite active or at least more active in publishing music in the middle part of the previous decade, and then you seemed to have “gone away” until returning with La Croix de Sang this year. What was the reason, if I may, for that “absence,” and were you still busy writing music throughout that period?

I always compose music. I just don't give a shit enough about releasing anything. Around 2010 I went through some changes in my life and I lived, let's say, closer to what I try to manifest in my music. I had a house dedicated to that, so my art grew stronger. From chaotic seasons to more ascetic ones of my life during these years all the fruits have been harvested in order to develop Drastus's mystic. I do not see music as a weekly hobby, you see, it has to be the "sublimation" (Phys./Alch.) of an "all."

When compared to some of your previous work there seem to be quite a few things different from that period and La Croix de Sang. Some of them quite technical, like mixing, vocal style and production, and some of them aesthetic, such as greater emphasis on a “direct” writing style as opposed to a former stress on atmospherics and sometimes even a more industrial mode. Would you say those changes, and possibly others, were the product of just having more time and maybe money (and access to better tools) or of a changed view of how you wanted to make and produce your music?

Both I guess. Money is always a problem, for sure, but it is an inexpensive investment here over ten years I suppose. Stability, in general, was clearly a problem back then… But honestly, I would say that finding the proper drummer has always been the main problem for Drastus, definitely. But in any case, I wanted something more bestial and "played" on that album, more carnal, something that bites directly to the throat, so here it is.

When you look at La Croix de Sang, is there something you are especially proud of? A certain song, or segment, or perhaps even your overall approach?

I know these tracks for a while now, they are all engraved in me and each have a specific relation to me. If I had to choose one especially I would say "Ashura" because it's the kind of stuff I always wanted to do. This approach is still perfectible actually, I think.

Always wanted to do in what way?

In the way of what can be a “total black metal” approach in my opinion, black metal in its full potential. A very brute and direct maelstrom where violence is at its zenith, to a point that it is sanctified. You can try to do dark music but at the first step fall in easy crying babies’ melancholy like most of the bands. I do not lean toward that.